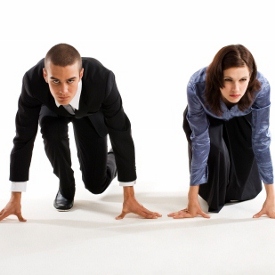 There’s lots of talk about dating more than one man at a time called Circular Dating. While in theory I’m for circular dating, or the practice of dating multiple people at a time to avoid  too much into something until you know where you stand relationship-wise. But do they all really need to know how many other people you are also dating? Recently I asked by a reader how a man would react if he knew she was dating several men at a time. She really liked one of them and contemplated telling him about the others to see if he’d try a litter harder to win her over. But is that really wise?

Will he be more into the chase, or will he start to back off once he finds out how many other men are on your dating roster?

How would you feel if the tables were turned?

Despite the evolutionary fact that men are competitive by nature, you might be surprised to learn that relationship ready men don’t always like competition, especially when there is a high probability of losing. Contrary to popular belief, competition is actually more of a stressor for men than an ego-driven match.

While men are definitely hunters when it comes to getting women in bed, such competitiveness might actually be a turn off to a relationship ready man as it may cause him to question how serious the woman is about finding a relationship if she’s dating several men at a time. Some ego-driven men might see the competition as a challenge, but most men will just see it as a waste of time.

A man’s reaction to competition is loosely based on three factors: the woman herself, the level of connection he has with her and his level of interest in this woman. In general, if a man really likes a woman, his competitive nature will start to kick in and he’ll want to stake claim on his territory, so to speak. However, if a man isn’t particularly interested in a woman, or if she’s too hard to get, then it’s not really worth the effort to him to continue to pursue her.

Personally, I prefer to date one person at a time three dates at a time. In my book, The Relationships Men Commit To And Why, I talk about three dates in three weeks. If a person, man or woman, can’t focus on one person for just three dates, you have to ask yourself: how serious can you really be about giving a relationship a chance with someone.

When I met my sweetheart and realized how much I really liked her,  my territorial side came out because I didn’t like how it felt to be one of many choices. I wanted to be the only choice, which is why I promote dating only one person at a time.

At the end of the day, if you’re lying in bed wondering why he suddenly stopped calling you, it is probably best to keep your dating habits to yourself in the future until you feel a mutual connection. Telling a man about the other men you’re dating will significantly change the dynamics of dating that person, and not always for the better.