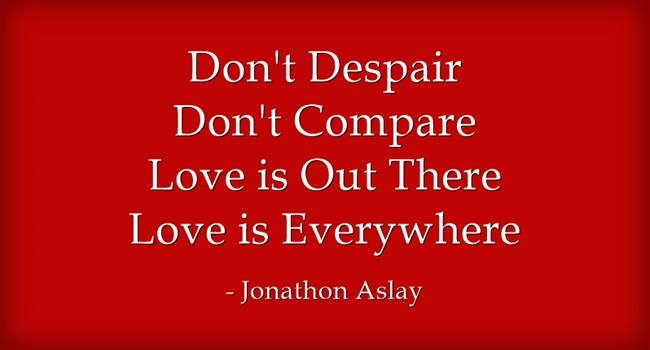 Don’t Despair, Don’t Compare…
Love is Out There, Love is Everywhere

On the lips of many who have loved and lost are the following:

“We had something amazing and special, and I don’t believe I’ll ever find it again.”

I’m here to tell you that yes, you will, and the odds are very good that the next love will be even better than the one you miss now.

I hear it all the time, and I’ve done it myself. We come out of long-term relationships believing that only one person holds all the qualities we want and admire. This belief keeps us locked in the past and fixated on (sometimes obsessed with) the person.

In fact, they hold out so much for those qualities, they are always comparing new people to the old one. And they forget all those BAD qualities that were the reason they broke up with that person. Or they forget how incompatible they were because they’re dreaming about those good qualities they think they lost.

Wanting the GOOD qualities is a GOOD thing, and the GOOD news is that there is an abundance of men out there who possess those qualities and much more. Certainly, there are many men who have the GOOD… and little to none of the BAD you’ve experienced before.

You just have to get out of your own way and find them.

Before you do that, I want to warn you about one thing… make sure those GOOD qualities you’re pining for really were GOOD and not BAD or SO-SO with a nice layer of makeup on them.

I’ll give you an example…

Tiffany and her boyfriend of ten months, Justin, just broke up. One of Justin’s GOOD qualities was that he was very laid back, open, and revealing. Tiffany loved that the most about him, because her previous boyfriends had been controlling and closed-mouthed.

However, there was a reason that Justin was so laid back.

He smoked pot every day.

For some women, this is not a big deal. But Tiffany was unaware of Justin’s habit because she was never around him while he was doing it. So he was not being honest with Tiffany about who he really was and what he really did.

Again, it may not be a big deal, but Tiffany worked in law enforcement. So yeah, it could be a big deal for her under certain circumstances.

Once she found out, she was glad that Justin was gone, but she still wants a man who is naturally that laid back and open. She may easily find one, or it may take some time.

My point here is that the past is just that, and it’s time to look forward and see all the wonderful men out there. There’s no need to beat yourself up locked in the past, because love is out there and is everywhere. Get out there and find your Mr. Right! He’s waiting!