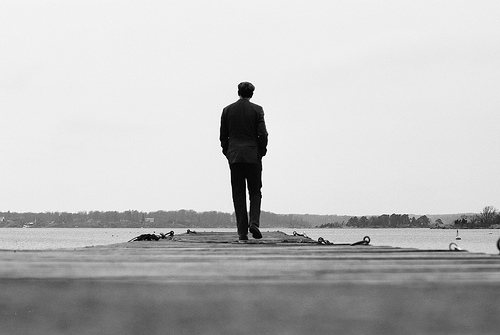 Why Men Leave The Minute They Become Vulnerable

Have you ever been in a relationship where a man bolted the minute he became vulnerable?

That’s right, the moment he let his guard down he was gone. You might be wondering why would any man do this, leave the second he opens his heart.

How could this happen given that you’re the most loving, kind, compassionate and understanding woman out there? You’re thinking he’s safe with me to share his feelings, there’s no need to run. But here you are scratching your head wondering how could this happen (AGAIN).

You’re the girl who welcomes a man’s vulnerable side. In fact, if he cries, he’s in a safe place. So how could this happen? Why would he disappear the moment he opens his heart? The answer is simple and you even know what it is…. he’s scared.

Why would he be scared, Jonathon, given that he knows I’m safe?

The reality my friend is this, before a man becomes a man, he starts off as a boy.

As boys we are taught to keep our emotions in for fear of being ridiculed as kids. If we ever showed emotions on the playground, we would be laughed at, teased, made fun of or picked on as the emotional kid. What’s worse, our fathers reinforced this by reminding us that emotions in public are BAD. That’s right, our greatest male role model told us it’s bad to show our emotions in public.

Yes, I get it, it’s all so confusing.

But here’s the thing my friend, all he’s really done is share his problems.

All of these things were PROBLEMS.

There’s a big difference between PROBLEMS vs. FEAR.

That’s right, FEAR is a whole other story.

We men have all kinds of fears, we keep it tightly locked in.

But Jonathon, he’s brought me into his confidence, so he must trust me.

Here’s the thing, what’s going on in your man’s mind is the following…

Come closer to the screen, you won’t want to miss this.

Take a few quick breaths and just relax into what I’m about to tell YOU.

We fear needing you. because it makes us feel indebted.
We fear losing your respect, if you knew us better.
We fear not being see as a man, if we can protect you.
We fear falling too deeply, before we’re ready to fully commit.

So the minute we feel fear, we bolt. It might be for a minute, it might be a day, it might be a week… but in these moments, we need space.  Here’s the good news my friend. There are 3 things you can do to keep your man close when this happens.

In fact, as I’m writing this email, I can tell you that I felt most of these fears.

Now I’ve told you how happily in love I am. I’ve even said I’m deliriously in love. I have the biggest crush on my beloved. Over the past 28 months, we have formed a nice partnership. This relationship was built over time and trust. This trust allowed me to surrender to my fears. This trust was the result of 3 things she did that kept bringing me back whenever I…

Felt fear, questioned the relationship or wanted to retreat in my cave.

In the past when this happened, other women did the wrong things which pushed me away.

Learn what my sweetheart does that keeps me, loyal to the relationship and madly in love CLICK HERE.