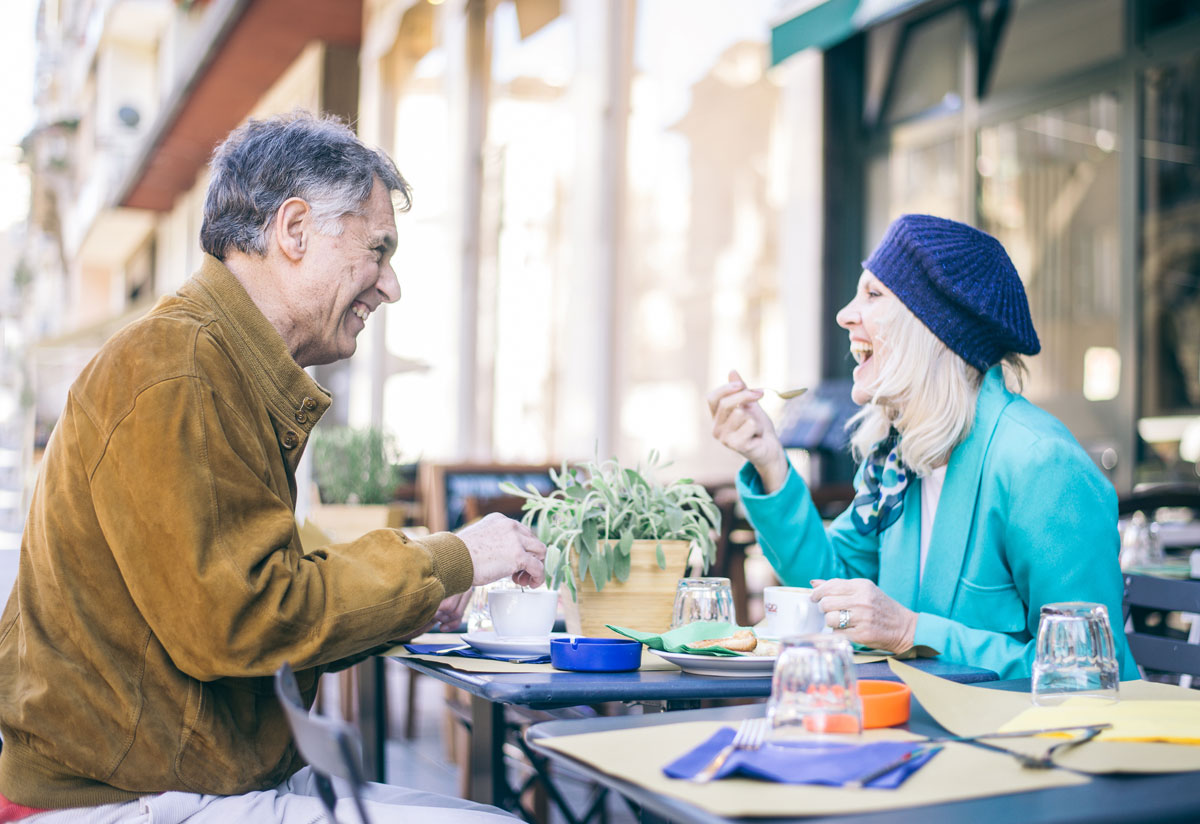 Have you ever been on a date with a guy who seems so wonderful and perfect only to be disappointed when the bill comes and he doesn’t offer to pay?

Well, I hate to burst your bubble, but if the first date is nothing more than a mutual-based interview process to assess chemistry and compatibility before deciding to pursue a relationship with someone, then your disappointment may not be well-warranted. Hear me out.

So often I hear from women how they wish they could revert back to a time when men were more chivalrous when it came to relationships and actually courted a woman. Nowadays, they tell me, men just want to have their cake, and eat it too, without putting forth any effort.

While I do believe there is a clear disconnect in today’s dating world, old-school chivalry is not the solution. Men are not to blame any more than women, but both sides of the equation are certainly not helping the situation either. The real problem with dating is how misplaced values have become, which has created a lot of confusion over what’s expected on a first date let alone a budding relationship.

The Greatest Dating Debacle Of Our Time

I recently had an interesting conversation with a single 43-year-old man from the gym who has never been married. He openly shared his feelings with me about relationships, particularly on the topic of money and dating.

I was happy to coach him on this topic because I understand how tough it is out there. In fact, I’m a huge proponent of the conscious dialogue surrounding the social science of a relationship. In light of his feelings echoing what I’ve heard from countless others I’ve talked to, I thought it was time I gave the topic the attention it deserves by sharing this with you. My intention is to help you navigate the changing standards of dating.

Ladies and gents, it’s time we started talking about the economics of love and put to rest any confusion over who pays for what when starting a new relationship.

Should Men Pay For The First Date?

Now back to my story for the answer. I asked my friend for his thoughts on who should pay for the first date. Before we reach a verdict, let’s define what a first date is exactly.

A first date is an initial meeting between two people who have yet to be acquainted. These days, most people going out for a first time don’t really know each other or have never even met in person before. Given that almost 50 percent of all new midlife relationships are happening through an online connection, it’s important to set the stage for a bit of perspective.

My friend said he views paying for first date the same way he views tipping—it’s a common and expected practice. For him, and many other men I’m sure, paying for the first date does not come from a place of generosity, but rather a sense of obligation. To even debate the subject at all misplaces value and meaning on the mere gesture of paying for a date. He feels like it’s just another “should” that has more to do with social expectation than anything else.

If a man doesn’t pay on the first date, then he will no doubt be perceived as cheap. However, since neither party knows one another until spending some regular time together, my friend argued that this burden of expectation should not fall on men. He pointed out that women can earn just as much, if not more, than men in many cases.

My friend concluded that the first first few times together would be better served spending time as friends rather than a courtship. He said if we took the hierarchy out of the equation and focused on meeting as friends first, in which sharing the expenses of social gatherings are more of a common practice, then a more organic result would likely occur. I have to say, I completely agree.

Friends don’t expect the other to pay based on their gender, so why should it be any different when dating? (Tweet this)
The Yin and Yang of Relationships
Now there are some who believe that the masculine (a man) gives and that the feminine (a woman) receives, and that a couple will not survive without this polarity in a relationship. However, this is a really one dimensional view of relationships.

From where I sit, the best relationships are a two-way street. There’s give and take on both sides, a constant exchange of masculine and feminine energy between a man and woman because we all posses both types of energy. This artful exchange begins on the very first date when you meet someone for the first time.

Some will argue that a man should pay for a first date because a woman is giving of her time. I find this notion incredibly insane because this implies that man’s time is no more valuable than a woman’s time.

On the flip side, others will argue that a woman time is more valuable because of how much she invests in getting dolled up for a date. How is this a man’s responsibility if she is using sexual appeal as a form of currency for a few meal? She’s the one playing into an old stereotype that devalues women, not the other way around.

Lastly, if the measure of a man is based on whether or not he pays for a woman’s meal or drink, then we have an even bigger problem with mating, which plays into something I’ve noticed more and more as time goes on.

I’ve heard from many of the women that if a man doesn’t make the date his treat, then she won’t feel valued. But how can a man value someone he doesn’t really know? If the depth of one’s value is based on the opposite sex paying for dinner, then we have a bigger problem indeed. The traditional model of dating doesn’t work anymore because women are no longer considered a piece of property as they once were in a different era

Money is a big deal for most people, especially in the context of a relationship. If you can’t see eye to eye on first date expenses, then there’s a strong chance you may not be financially compatible in the grand scheme of things.

When we take the money out of the equation real “values” take center stage. (Tweet This)

Dating requires discretionary income to cover the entertainment expense of getting to know one another. We no longer live in a time of close proximity (like small towns or villages) where two people can get to know each other organically because they live close and share social activities.

Dating requires going out, which costs money. Sure, first dates can be inexpensive like coffee or a picnic, but let’s get real. How turned on can one really get after meeting someone for coffee?

While a man can surely afford a cup of coffee, that’s not really the point here. And as far as picnics, how often can you do that before a relationship gets boring? What about those who live in colder climates?

The reality is that social activities are the bedrock of making a new friend, and friendship is what drives the best relationships. Friends don’t expect the other to pay based on their gender, so why should it be any different when dating?

This is why I believe the dating process would be better served if the expenses were shared. Now I’m not talking about splitting the bill, more like taking turns showing appreciation. This creates a common ground that provides more room for generosity and allows value to build up over a period of time.

The Pathway to True Intimacy

Many will argue that this will disrupt the theory that “men need to chase” for the relationship to take off. I’m here to tell you the best way to have a relationship “take off” is through mutual effort.

Given that the beginning of mating is really an interview process to determine compatibility, fair exchange will go a lot farther in building trust rather than the old method of money for sex. When women share in the expenses, they demonstrate their interest in a guy as well and they also maintain their control of not being beholden to a man.

Here’s the thing, women are no longer weak and many now outnumber men in income. When a man and woman meet these days, their cash flow might be very similar because we don’t live in a world where men make all the money. Women of the 60s fought for their independence, but today many women seem to seek a double standard wanting a man to pay for everything even if she makes as much as he does.

And as far as chivalry is concerned, chivalry is the combination of qualities expected of an ideal knight, especially courage, honor, courtesy, justice, and a readiness to help the weak. If women are weak, then, once again, we have a bigger problem.

Now there are some men who will insist on paying especially those in the one or two percent of the income bracket. These are called alpha males and while some of these alpha men offer to treat you because it’s coming from a generous place (they often have the means), many of these same men are very controling and don’t make the best boyfriends.

Most men have been conditioned that paying for the first date “is the right thing to do.” However, in most cases, it really is just like tipping (an expectation) and this kind of behavior really goes against the spirit of generosity when it’s expected.

The Bottom Line Is This…

Should the average man (meaning those who live paycheck to paycheck) pay for the first date or the first three dates for a woman he barely knows? No. And you shouldn’t pass judgement on him for that either.

Mutual trust is built over time and in the early stages of a relationship, a fair exchange evens the playing field for everyone involved. If we take money and sex out of the equation right in the beginning and spent the time building a friendship to determine compatibility, both sexes would be able to recognize if they are really a fit for a long term relationship. This benefits women as well because it’s all about choice. Do you want to see him again? Do you want to kiss him? Do you really want to have sex with him?

Let me end with this. I believe in fairness and generosity. When it comes to first time dates and long time relationships, I also believe in sharing . Expectations or conditions are a killer of a true healthy growing love. Traditional social scripts create an adversarial approach to dating, mating and relating. Hopefully, this post serves as a way to awaken thoughts of how to maybe do things a little different.