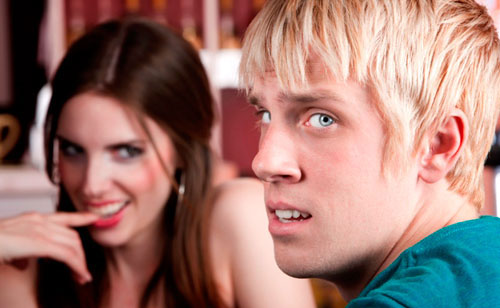 Why An Honest Man Can Be A Bad Bet

Such an empowering word and it means so much to a woman.

As a coach who has interviewed thousands of women, I can say TRUST is how a woman truly opens her heart.

Honesty is the foundation of integrity. Honesty leads to deeper intimacy. Honesty IS the best policy.

But when can honesty be a bad bet when seeking love?

As your guy spy into the male mind, I want to share some ‘man speak’.

Imagine the following: You’ve met an amazing man and you’ve been dating for a few months. He’s kind. He’s courteous. He’s attractive. He’s into You. And the sex is off the charts.

You feel a real connection with him.

Here’s the thing, when you first began dating he said something like this: “I’m not looking for a  relationship right now.”

You didn’t make much of it because you might have said to yourself “I’m not sure about him yet anyway.”

So now the relationship is going little deeper.  The sex is becoming more regular. The emotional connection seems stronger. The doors to the exclusivity have begun to crack open. All the making for a serious relationship. He hasn’t done anything which creates mistrust. Since trust allows you to go deeper emotionally, you’re really beginning to open your heart.

There’s only one problem. What’s that Jonathon?

Ok, we said it’s been around 3 months. You share some activities together. He comes over to your place for dinners. He occasionally takes you out for drinks or a movie. The relationship is light and without pressure. He doesn’t get much into your personal life. He doesn’t share too much of his own. The sex is really amazing and you feel deeply connected.

You take a chance and ask “where’s this relationship going?”

All of a sudden his behavior changes.

He responds with a vague answer. He begins to call less. His text messages become more sporadic. He shifts his regular pattern.

Do you want to know what’s really going on?

As your heart protector. As your guy spy into the male mind. As your man speak translator.

Here’s what he really means. Now I hope you’re sitting down, cuz this might hurt a little.

When a man says:

I’m not looking for a relationship right now.

I want to see you, I want to have sex with you and I want to keep my options open (should my princess walk into my life).

And here’s the thing.

Because we told you up front we’re not interesting in a relationship right now, we men feel we are being totally honest and in total integrity with you. We might even be subtly reminding you of our impending escape.

It’s kinda bull shit I know, but it’s the truth.

Look friends, I was no angel when I first began dating after my divorce. So this comes from knowing men and even my own behavior.

Now that I’m totally in love. Now that I’m a professional dating & relationship coach. Now that I know the importance of real integrity, I’m here to help.

Truth is, I hurt someone, it was wrong and I woke up.

So here’s 3 things to remember before you give your heart.

1st) Ask yourself if he’s relationship ready? Is he going through a divorce, did he just break up with a long term g/f, did he just change jobs or worse, lose his job.

2nd) Does he include you into his life and vice versa? Does he take interest in you personal life, the good the bad the ugly and does he share his own stuff too.

3rd) Does he talk about a we or is it all about him? If he sees his life as a “me” and not a “we” you might be in for a rough road or worse a path to heartbreak.

Just remember these men feel they’re being honest because …

So the next time you hear:

I’m not looking for a relationship right now.

Ask yourself, is he worth the gamble?

Lastly, if a guy knows you’re falling for him and he doesn’t state his intentions, he’s out of integrity.