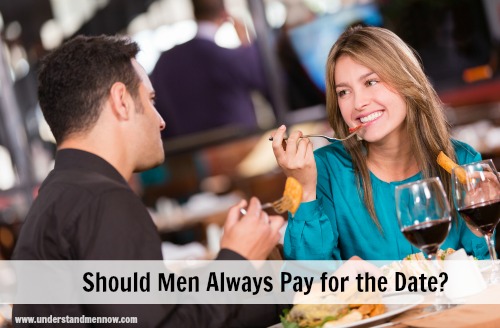 In my parents’ day it was a given that the guy always picked up the tab and that has been the traditional expectation over the years. But are things different now?

Let’s say a woman makes $175,000 a year and her boyfriend makes $95,000 a year. They each have equal personal expenses and they spend equal time at each others homes in a committed relationship. Their disposable income is proportional. Should the man pay for all the entertainment expenses in the relationship? Do you think it should be 50/50 when it comes to dinners out and vacations? Or do you think economics should be proportionate to what each other makes?

Traditionally if the roles were reversed, men were expected to pay. However, with the increased income opportunities available to women, times and expectations have changed. If this scenario was your dynamic, how would you handle this with your partner?

Here are some of my thoughts… with all things being equal, whether it be it lifestyle or personal beliefs, a relationship takes money. Entertainment is part of any relationship (dinners out, movies or vacations) and the traditional roles “a man pays all expenses” doesn’t always make sense anymore.

This tradition was based on a time when only men worked but times have truly changed. In fact, times have changed so much that women earning twice as much as a man is no longer a rarity and is quite common these days. Expectations can also differ by age groups. Many men over 40 who earn a decent living may still hold to traditional views. Younger people have different expectations because they grew up differently.

Now there’s are some who believe that it emasculates a man if a woman pays… that’s a crock. While men love feeling like a hero, 90% of men feel appreciated if his partner treats for him as well and over 80% of men surveyed (Match.com poll) prefer close to 50/50 relationships.

My belief is that having a conversation early on in the dating process is the best course of action. Share your truth with each other. There are many men who’ve gone broke being the gentleman and they ultimately grew to resent the woman because they never talked about it.

Here’s the thing, if a man has the disposable income to entertain his partner, that’s great. However, if he lives on a fixed income, then I think it’s only fair to talk about each person’s needs and wants to see if they are on the same page about money.

It also goes without saying that if a man is in a committed relationship and expects a 50/50 approach to finances, he should also be willing to contribute to a significant portion of traditional women’s responsibilities such as cooking, cleaning and shopping.

This topic may annoy some women, particularly those who have high expectations of “marrying up.” Frankly they’re the ones who need to reconsider and absorb this point because almost 50% of failed marriages cite money issues as the problem.

The bottom line is this… be sure you talk about how you feel about money early on. If you’re not aligned, move on as the relationship will surely have problems later if you ever live together or get married.